ainbow Snippets is a group for LGBTQ+ authors, readers, and bloggers to gather once a week to share six sentences from a work of fiction–a WIP or a finished work or even a 6-sentence book recommendation (no spoilers please!). 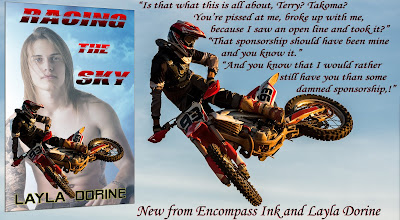 In this group you’ll find anything from romance and historical fiction to mystery and YA. The common thread is that every story’s main character identifies as LGBTQ+. The snippets could range from zero flames to full-on sexytimes, anything goes content-wise. The only rule is snippets will be 6 sentences long–one for each color in the Pride flag.

I would invite everyone to please come check out the Rainbow Snippets group, click on a link, read and comment on the writing available and get involved yourselves in this awesome exercise. The link to the group can be found HERE.  The following Snippet is from my newly released supermoto themed release, Racing the Sky, which can be found HERE!  From one of my favorite scenes in the story, here is this weeks snippet.


Looking at the big man, who was watching him from the far end of the counter, Nicky gave a tense smile.
“Could I, umm, have another slice of pie? Apple this time, please.”

The man laughed. “How about ice cream with that?”

“Sure. Maybe I’ll die of a sugar overdose.”

They were alone in the diner, save for the guy on the grill in the back.

“You know,” the man began, “there are some fun ways to burn off sugar, if you’re interested. I get off in an hour.”

Nicky shivered, partly in fear and partly in anticipation. He could say yes, easy. Hell, it wasn’t as if Terry had even waited for them to break up before he’d moved on to someone else. Still, Nicky had never been with anyone but Terry, and this was a stranger, even if he was friendly as hell.

“Think about it,” the guy said before he headed to the back.

Layla Dorine
LAYLA DORINE lives among the sprawling prairies of Midwestern America, in a house with more cats than people. She loves hiking, fishing, swimming, martial arts, camping out, photography, cooking, and dabbling with several artistic mediums. In addition, she loves to travel and visit museums, historic, and haunted places. Layla got hooked on writing as a child, starting with poetry and then branching out, and she hasn’t stopped writing since. Hard times, troubled times, the lives of her characters are never easy, but then what life is? The story is in the struggle, the journey, the triumphs and the falls. She writes about artists, musicians, loners, drifters, dreamers, hippies, bikers, truckers, hunters and all the other folks that she’s met and fallen in love with over the years. Sometimes she writes urban romance and sometimes its aliens crash landing near a roadside bar. When she isn’t writing, or wandering somewhere outdoors, she can often be found curled up with a good book and a kitty on her lap.