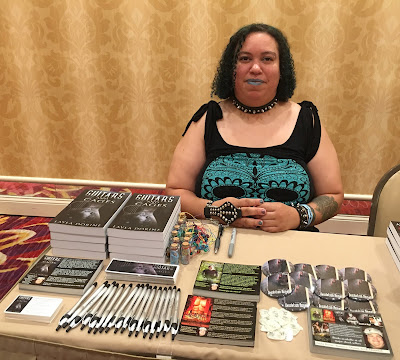 First let me say, it was New York, a whole different world from Everett, Washington where the conference was held in the spring. Arriving near dawn on the Greyhound I was treated to the view of the city still all lit up like I hadn’t seen for twenty years. Going through Philadelphia earlier in the night was a similar experience, glazing out the windows, marveling at the sheer size of the buildings, the rapidly moving traffic, and the volume of people quickly served as a reminder that I wasn’t in Iowa anymore. At least I didn’t need a tornado to whisk me halfway across the country, though I have to admit, my head was spinning for those first few minutes after I stepped off the bus.

Retrieving my bag and finding the ladies room gave me a chance to get over the initial panic of being in such a crowded, loud, overly stimulating space. Of course that just meant it was time to find my way to the subway platform that would take me out to Terry’s place. So many thanks have to go out at this moment to Terry for giving me a place to stay during the con, amazing conversation, introducing me to Halal Food, showing me Time’s Square, Jr’s Cheesecake and a host of other awesome sights. She also provided spot on subway instruction that had me feeling confident getting around even when she wasn’t with me, which allowed me a very unique New York experience indeed. In fact, the science-fiction short story I’m currently working on for the Into the Infinite anthology was born on the subway playform during a conversation we were having about the fact that the deadline was September 9th and my brain had sort of shut down. I hadn’t even started at that point, since I couldn’t figure out what in the world my plot was going to be. Then rattle clack clack, there it was in the sound of the subway as it was approaching. I wish I’d had more time to spent in the city, I could have spent afternoons riding around on the subway taking notes and generating ideas.

But I digress. I do that a lot. Sorry. I might have to blog on New York separately, it certainly deserves its own entry, it was amazing, full of so many places I’d love to see and explore, like the village and central park.

BDSM writers con kicked off much the same way as it did in Everett, with an author buddy meeting that allowed the authors attending to gather together with Dr. Charley, introduce ourselves to each other, talk about what we write and why we’d chosen to come to the conference, and most importantly, it is the start of lasting friendships and connections. While there is a diversity of author experience levels in the room, that common thread that we all came to the con because we love reading and writing the kinky stuff sets a good platform to talk shop. Over the course of the week, I would find myself meeting publishers, setting my sights on writing three more anthology stories, fleshing out ideas in my head and mentally cleaning up one of my books not quite in edit yet, and all because of this one jumping off point.

It’s hard to be shy and quiet in a room full of interesting people who are helping to provide a safe space to be oneself. Conversation starts flowing, and it’s mercifully easy to get dragged in and pulled along, or jump in with both feet depending on the topic and the opportunity to interact only grows when the Author meeting moved to the Tex-Mex restaurant next door and readers began to join us.  Learning begins in these conversations, honestly, if you’ve never heard the story Dr. Charley tells about Domming in slippers, well, then you haven’t had the chance to learn why comfort is one of the key necessities in a scene. Some of the tableside reenactments of events are enough to get the creative juices flowing, and as an added bonus, the food was positively amazing. While the official kickoff of the Con actually comes at opening ceremony the following day, this unofficial event the night before has already become one of my favorite times for interaction. I can’t wait for Everett’s in spring, we held that get together at the Blue Water Distillery, and wow, those Spank Me drinks they made were AWESOME!

Moving on to opening ceremony, I must stress that its far more than just talking about what one can expect in the days to come, it is a chance to learn about the origins of the con and why Dr. Charley has worked so tirelessly to put on the convention year after year and even expand it to include a west coast one. After the ceremony, there is a break for lunch and then the classroom learning begins. Let me tell you, if school had been like this when I was growing up, I might not have snuck novels inside my textbooks for something to read when the lectures got boring.

One thing I love about the program schedule is that things start out pretty light. One of the first classes I attended discussed the use of the senses and sensations in describing BDSM scenes within a story. The presenters, Chris Anson and Lise Horton were amazingly knowledgeable and engaging and really focused on the importance of all of the senses being represented within a story as well as the importance of making up for any senses that were restricted (for example through the wearing of a blindfold) by being sure to feature what the character is feeling or hearing more prominently, and how the restriction of a sense can even heighten the sensations experienced by the other senses. Sound, for example, can be used to ratchet up anticipation levels and tension, scents can be used to spark memory and association, it gave me so much more to think about when writing my characters , not just in my D/s stories but in all of my work.

Attending Dr. Charley’s Do’s and Don’t of writing BDSM workshop left me with a ton of notes, and listening to her talk actually had me making comments in my notebook on specific places in one of my stories where I needed to go back and make adjustments. There’s so much to consider when writing a story, so much fact to separate from the fiction and that’s one of the things the conference does well. For those of us who are only dipping toes into the lifestyle or who have very little opportunities to participate, indulge, or even study the way a scene unfolds, her knowledge and the knowledge of all of the presenters is more valuable than gold.

Each workshop is designed to not only inform, but to allow time for questions, comments, demonstration, exploration, discussion, and the dispelling of myths. At the Exploratorium there was a flogging display, a chance to purchase different styles of floggers, try them out, feel their weight. There was an amazing demonstration of the violet wand, discussion on how it works, a chance for those who were willing, to experience it. The publisher’s panel was highly informative, with plenty of opportunities to speak to the publishers to see what they looked for when selecting which books to publish, and what anthologies they have coming p It was also very helpful to learn what they see too much of, or what makes them put a book down if they are reading it. Having a chance to speak with them one on one after the panel was extremely informative as well and allowed me to get clarification on the anthologies I plan to submit to.

If you are a reader or a writer of kinky fiction, then this is the con for you. From Interrogation workshops to sensual shibari rope tying, Doming on a dime to recognizing signs of stress for a Dom, there is a workshop for everyone. I’ve registered for Everett 2017, hope to see both old faces and new. 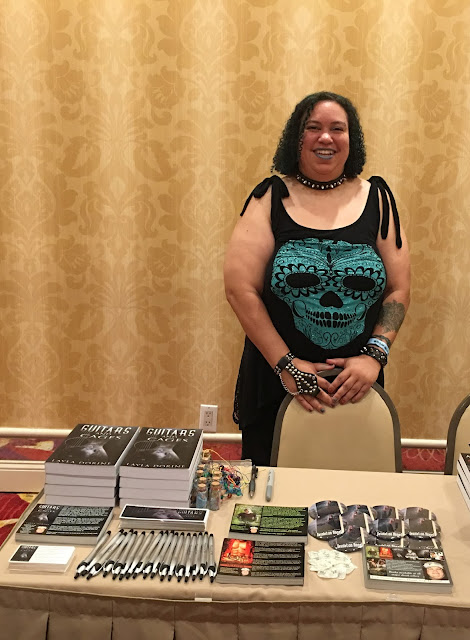 Layla Dorine
LAYLA DORINE lives among the sprawling prairies of Midwestern America, in a house with more cats than people. She loves hiking, fishing, swimming, martial arts, camping out, photography, cooking, and dabbling with several artistic mediums. In addition, she loves to travel and visit museums, historic, and haunted places. Layla got hooked on writing as a child, starting with poetry and then branching out, and she hasn’t stopped writing since. Hard times, troubled times, the lives of her characters are never easy, but then what life is? The story is in the struggle, the journey, the triumphs and the falls. She writes about artists, musicians, loners, drifters, dreamers, hippies, bikers, truckers, hunters and all the other folks that she’s met and fallen in love with over the years. Sometimes she writes urban romance and sometimes its aliens crash landing near a roadside bar. When she isn’t writing, or wandering somewhere outdoors, she can often be found curled up with a good book and a kitty on her lap.